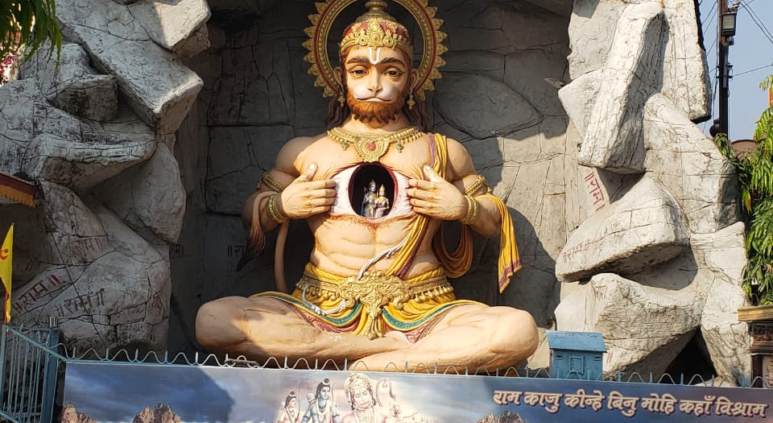 This photograph was taken in Rishikesh, India’s magical, spiritual city. Hanuman, featured in the photograph, is the monkey deity, half-monkey, and half God. Hanuman is known for his superpowers. He jumps over mountains, swims across oceans, runs like a gazelle, and can carry an elephant on his back! He is an extreme superhero! Being half-monkey, he was also very playful and often a trickster. His antics agitated the other gods. One day, the gods were so annoyed with Hanuman’s pranks that they decided to punish him by taking away his superpowers.

As the story unfolds, the reigning king, during this time, King Rama, to whom Hanuman was completely devoted, asked for Hanuman’s help. You see, his most beautiful and beloved wife, Queen Sita, was captured by an evil king and needed to be rescued. Bravely, Hanuman accepted the quest to rescue Queen Sita. However, without his superpowers, this quest was quite challenging. He struggled in desperation, rallying across deserts and mountains. As he approached the great ocean, he was bewildered. How would he cross to the island of Shri Lanka where the Queen was said to be captured?

While contemplating crossing the ocean, he was suddenly approached by the king of the bears, Jambavan. Jambavan revealed to Hanuman that his divine superpowers were always inherent within him. With this revelation, Hanuman immediately took a great leap of faith and stretched his legs all the way from India to Shri Lanka. This is how the pose Hanumanasana, the monkey split, came to be.

The tale of Hanuman reminds us to remember our strengths, our courage, and our true nature. We may not be able to stretch across oceans or jump over mountains, but through our practice of yoga, we return over and over again to unravel and discover the truth of our divine nature. In the photograph above, you see Hanuman tearing open his chest to find implanted on his heart, King Rama and Queen Sita, forever reminding him of his dedication and faithfulness to his beloved King and Queen. In addition to his superpowers, Hanuman’s devotion was the truth of his divine nature.

Try the following yoga class, which leads up to the pose hanumanasana. Yoga for Hips and Hamstrings I hope to see you on the mat! 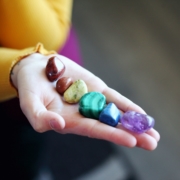 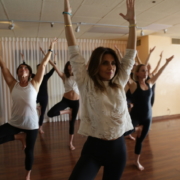 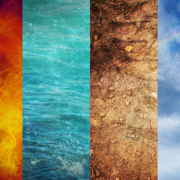 Purification of the 5 Elements ( Buttha Shudi)

Yoga Awakening with Sue Why Yoga?
Purification of the 5 Elements ( Buttha Shudi)

Awareness of the Subtle Body
Scroll to top